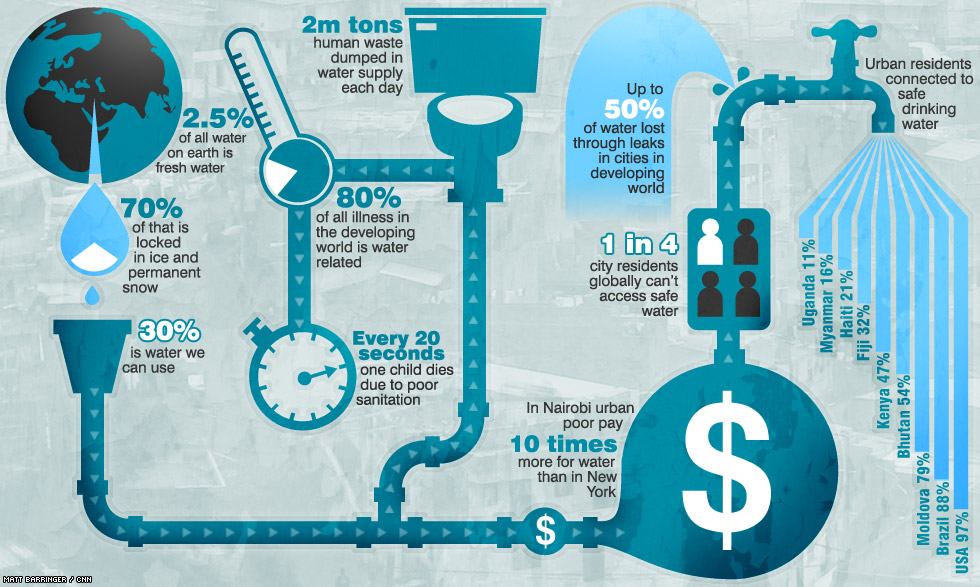 The world’s business leaders and decision makers gathered at 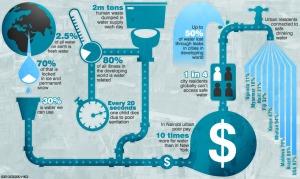 the annual meeting in snow-covered Davos, Switzerland in January to discuss the most pressing issues of the day. One of the questions was: What is the greatest social and economic risk of the coming decade? The selection of answers consisted of 28 risks, including wars, weapons of mass destruction and epidemics. The answer chosen by the world’s economic elite was: water crises.

The Earth may be a blue planet when seen from space, but only 2.5 percent of its water is fresh. That water is wasted, polluted and poisoned and its distribution is appallingly unfair.

The world’s population has almost tripled since 1950, but water consumption has increased six-fold

To make matters worse, mankind is changing the Earth’s climate with 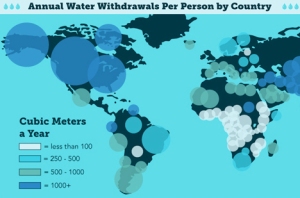 greenhouse gas emissions, which only exacerbates the injustices.
When we talk about water becoming scarce, we are first and foremost referring to people who are suffering from thirst. Close to a billion people are forced to drink contaminated water, while another 2.3 billion suffer from a shortage of water. How will we manage to feed more and more people with less and less water?
But people in developing countries are no longer the only ones affected by the problem. Droughts facilitate the massive wildfires in California, and they adversely affect farms in Spain. Water has become the business of global corporations and it is being wasted on a gigantic scale to turn a profit and operate farms in areas where they don’t belong.

Will it be define access to water as a human right?

“Water is the primary principle of all things,” the philosopher Thales of Miletus wrote in the 6th century BC. More than two-and-a-half thousand years later, on July 28, 2010, the United Nations felt it was necessary to define access to water as a human right. It was an act of desperation. The UN has not fallen so clearly short of any of its other millennium goals than the goal of cutting the number of people without this access in half by 2015
The question is whether water is public property and a human right. Or is it ultimately a commodity, a consumer good and a financial investment?
The world’s business leaders and decision makers gathered at the annual meeting in snow-covered Davos, Switzerland in January to discuss the most pressing issues of the day. One of the questions was: What is the greatest social and economic risk of the coming decade? The selection of answers consisted of 28 risks, including wars, weapons of mass destruction and epidemics. The answer chosen by the world’s economic elite was: water crises.

Consumers have recognized for years that we need to reduce our consumption of petroleum. But very few people think about water as being scarce, even though it’s the resource of the future, more valuable than oil because it is irreplaceable. It also happens to be the source of all life.
Germany is a fortunate country when it comes to water. Many of its lakes are clean enough that they are safe for swimming. Germans splash around in pools, they drive to the seaside and they shower as often and long as they please. But they also contribute — unknowingly, in most cases — to the growing scarcity of water in many other parts of the world.
German consumers who buy Spanish strawberries contribute to the possibility that Spain could one day find itself in a dire situation like the one California faces today.
“I didn’t see the disaster coming,” says Donna Johnson, 72, with short gray hair, neon-colored sneakers and equally bright earrings. “When there was no water coming out of our well, I thought the pump was broken.” Like most people in East Porterville, the Johnsons get their water from a well, which pumps groundwater to the surface. But these wells are not as deep as those on the surrounding farms, and they run dry as a result. Half of East Porterville’s 7,000 residents have been living without running water recently, some for as much as two years.
Johnson collects donations and takes bottled water to her neighbors, while the authorities deliver water tanks and mobile showers. Most East Porterville residents cannot afford to drill new, deeper wells. The town is located in a part of the Central Valley that is among the world’s most productive agricultural zones, but it is of California’s poorest regions.

Water is not a problem only in poor countries…

It is a region where America, the global superpower, looks more like a developing nation, with its broken streets, run-down houses and residents without running water. Indeed, the water crisis is becoming a humanitarian one — because the absurd agricultural policy of many arid regions in California is being carried to extremes. More recklessly than elsewhere, wetlands in the state are being dried out to make irrigated agriculture possible. Part of the American dream, at least in California, is to subjugate nature, including both the desert and the water cycle. Water is transported from north to south through a 1,500-kilometer aqueduct. This has allowed Los Angeles to grow into a megacity in the south and the Central Valley to become a key center of the agricultural industry.
The dire consequences of this policy are now becoming clear. Temperatures in the southwestern United States are rising faster than the global average, because the region lacks the balancing effect of healthy water systems. And as temperatures rise, evaporation increases, exacerbating drought conditions even further.
Agriculture makes up 2 percent of California’s GDP, and yet it consumes 80 percent of the state’s water. Yet when Governor Jerry Brown declared a state of emergency in April and ordered Californians to reduce their water consumption by 25 percent, he was not referring to farmers. They are still allowed to extract as much water from the earth as they can.
While politicians still shudder at the notion that water is not an inexhaustible resource, businesses and investors have long recognized the scarcity — as well as the opportunities to turn a profit. Willem Buiter, chief economist at Citibank, summed up his industry’s assessment in a strategy document four years ago, writing: “Water as an asset class, in my view, will eventually become the single most important physical commodity — dwarfing oil, copper, agricultural commodities, and precious metals.”
Large portions of the private sector, as well as new technologies like fracking, cannot function without water. That explains in part why commodities companies have contributed a majority of the €84 billion ($93 billion) that private companies invested in water conservation methods between 2011 and 2014.

Could be solve water scarcity using the new technology opportunities?

But the food and beverage industry also spends large sums to minimize its water use. In the fall of 2014, Nestlé, the world’s largest food company — and one which critics suspect of seeking to gain control over water sources worldwide — opened a powdered milk factory in Mexico that requires no external water. Instead, it uses the water that is extracted from the milk during the drying process. The Netherlands-based company Dutch Rainmaker has built a wind turbine that uses the energy it generates to condense water out of the air. Other companies are developing washing machines and odor-free toilets that operate with almost no water at all.
The growing scarcity of water is increasingly attracting investors, who are betting on investments like desalination plants, water conservation technologies, water suppliers and waste water treatment plants. Many banks now offer the option of investing in water funds, which usually include a mixture of water supply companies with global operations, like French market leaders Suez and Veolia, as well as smaller, specialized water technology businesses.

Conclusion:
Water is a tomorrow’s problem of the world.
In spite of these dangerous signals in water scarcity in the world still continuing use water dissipation as before. The big conserving water action can be start with small steps, beginning with small improvements in our homes.
If we will remember the fact of the world’s population has almost tripled since 1950, we can suppose after some decades half the world will live under conditions of high water stress. For more details regarding the causes and projected consequences of the global water crisis, see the UN Water’s 2011 Policy Brief